Date
May 31, 2017 Posted By
emcgrath
Categories

Our second year student Naglis Montvilas from Balrothery has been playing football in a wheelchair since he was 8 years old. Naglis was picked to play for Team Ireland and the team will be  competing in the World Cup which is taking place in Florida this coming July. Naglis  along with his classmates and SNA Ms. Collins, organised and held a non-uniform day in the school to help raise the funds for the team in their goal to travel to Florida to compete with other 10 countries.

Naglis’s class presented a cheque to one of the Teams representatives.

The team will be participating in the upcoming Balbriggan Summerfest so if you see the team give them a thumbs up and wish them well as they prepare for the World Cup. 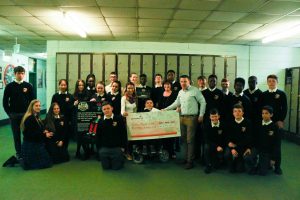 On behalf of all staff and students of Balbriggan Community College, we wish the best of luck to Naglis and his team in the World Cup in Florida.